Trade relations have existed between Arabia and the Indian subcontinent since ancient times. Even in the pre-Islamic era, Arab traders used to visit Indian coastal regions, which linked them with the ports of Southeast Asia. Cheraman Juma Mosque in Kerala is thought to be the first mosque in the Indian subcontinent built in 629 CE by Hazrat Malik Deenar 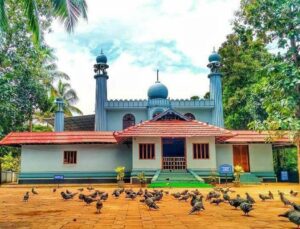 For centuries of migration of intelligentsia, mystics, traders, artists, and artisans into the Indian subcontinent and their interaction with the native Indians, who had distinct religious beliefs and established notions about art, architecture, and literature resulting in the creation of a new composite civilization. One of the most enduring achievements of Indian civilization is undoubtedly its architecture. Indian architecture, which has evolved through centuries, is the result of socio-economic and geographical conditions. Indian architecture, belonging to different periods of history, bears the stamp of respective periods.  The medieval period saw significant advancements in the art of architecture and, several new architectural characteristics and methods were introduced. The Islam religion spread in India over almost six hundred years. Muslims in Gujarat and Sind had begun construction work in the eighth century itself. But it was only in the thirteenth century that building activity on a large scale began by the Turkish State after the Turkish conquest of North India 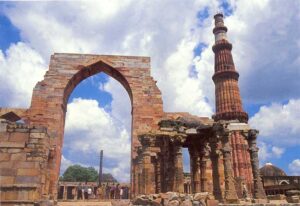 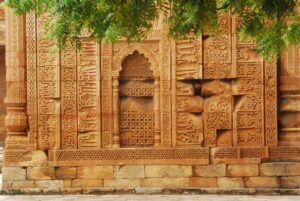 The Delhi Sultanate was predominantly spread in and around Delhi in North India and it gradually spread its rule across various parts of the Indian subcontinent for over three centuries starting from the thirteenth century till sixteen century. And after the end of the Delhi Sultanate, the Mughals ruled till the mid-nineteen century in India and made significant a contribution to the field of architecture in the Indian subcontinent by evolving a rich and unique architectural style, better known as Mughal architecture that portray a fine blend of Central Asian, Islamic, Persian, Arabic and Turkish architectural styles with the native architectural styles of India 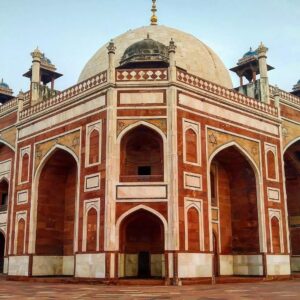 Huge domes bulbaceous in shape, large halls, colossal gateways, svelte minarets positioned at corners, and fine embellishments are some of the other signature features of the Mughal architecture. Mughals systematically designed monuments complexes minarets, forts, palaces, tombs, mausoleums, and towns which are unique examples of ultimate architecture. Monuments and towns developed for centuries throughout the ever-changing extent of empires in Medieval India 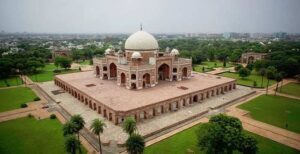 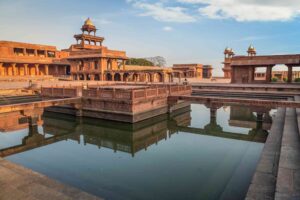 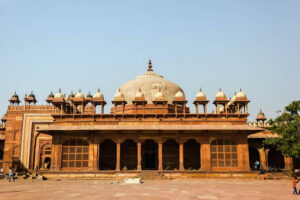 One of the architectural features of medieval India was also a coming together of styles, techniques, and decorations in public and private spaces of non-royal sections of the society. These included buildings for domestic usage, temples, mosques, khanqahs (hermitage of Sufi saints) and dargahs, commemorative gateways, pavilions in buildings and gardens, bazaars, etc.

While the Hindus were allowed to portray God in their art and were allowed to conceive manifestations of the divine in any form, the Muslims were forbidden by their religion to replicate living forms on any surface. So, their religious art and architecture mainly consisted of arabesque, calligraphy, and geometrical patterns on plaster and stone 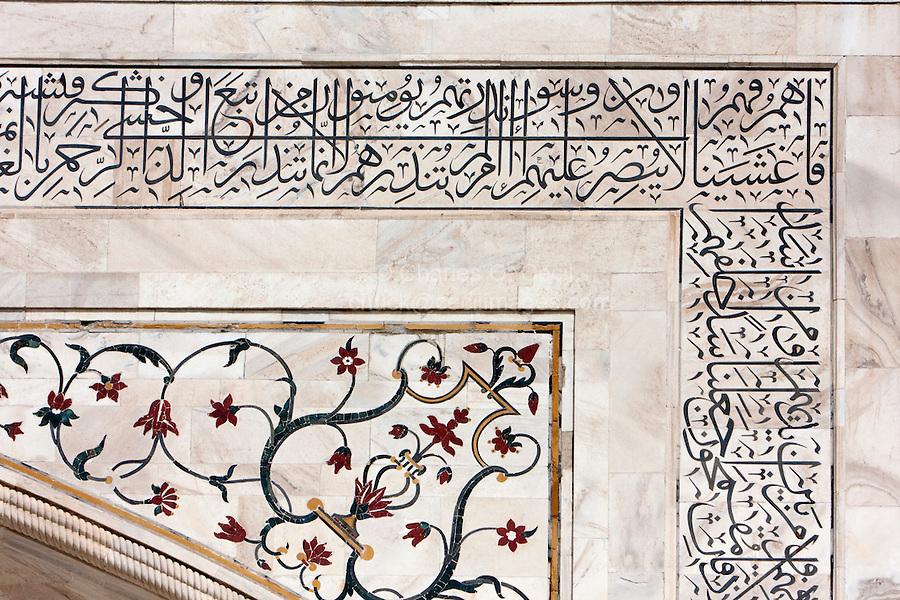 The Architecture is based on arches, domes and vaults. Muslims under religious injunction avoided the use of human figurines rather they opted for geometric patterns patters, floral patterns, inscriptions in various styles, and inlay on marble. Ornamental, perforated lattice screens with arabesques, star motifs, and other geometric designs such as pentagons, hexagons, octagons, circles, and more importantly gardens were an integral part of Indo-Islamic architecture

The monuments were decorated with calligraphy and intricate designs. A very important style of Indo-Islamic architecture was the magnificent tomb of the rulers. It was developed and refined during the Mughal era. The tombs were surrounded by beautiful gardens and the grave used to be placed below the memorial plaque. The most famous examples are the Tomb of Mughal Emperor Humayun in  Delhi, Tomb of Mughal Emperor Akbar and Taj Mahal at Agra 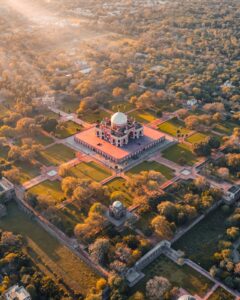 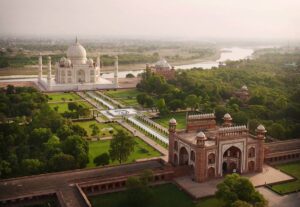 Though this form of architecture started before end of the Turkish rule, it was under Emperor Akbar that Mughal architecture got its due importance and fame. Akbar concentrated on using red sandstone for most of the monuments. He blended some unique foreign styles with the Mughal architecture like combining, high minarets, gardens, pillars, etc. with the main monument. The monuments were lavishly decorated with precious metal als like gold, silver and precious stones like diamonds, emeralds, rubies, etc 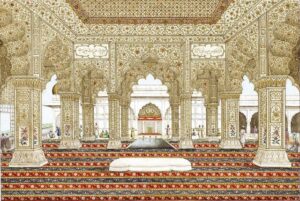 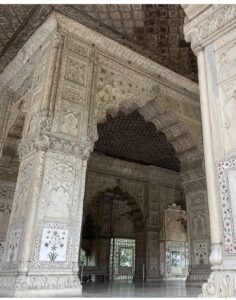 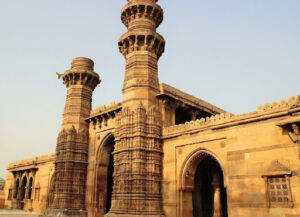 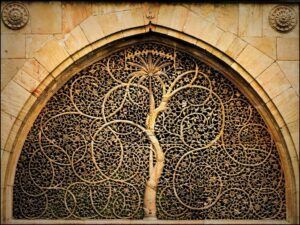 Designing on plaster through incision or stucco, designs were either left plain or with colors. Motifs of varieties of flowers were mostly painted or carved. In the fourteenth, fifteenth, and sixteenth centuries, different colored tiles were used to surface the walls and domes. In the wall panels, the surface decoration was done by the techniques of tessellation (mosaic designs) and dura (a decorative art that is an inlay technique of using cut and fitted, colored stones to create images). Other decorative forms: arabesque, calligraphy, high and low relief carving, and profuse use of jalis. The roof was generally a mix of the central dome and other chhatris domes, chatris, and tiny minarets. There was generally an inverted lotus flower motif and a metal or stone pinnacle atop the central dome 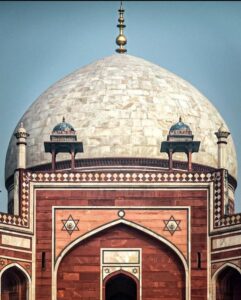 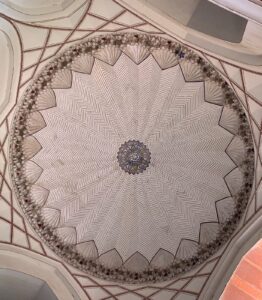 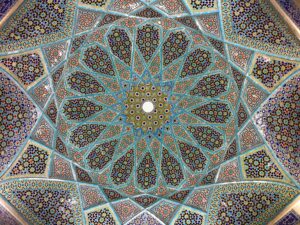 The walls were quite thick and made of rubble masonry, coated with chunam or limestone plaster or dressed stone. Stone used as sandstone, quartzite, buff, marble, etc. Polychrome tiles were also used and Bricks were used from the 17th century 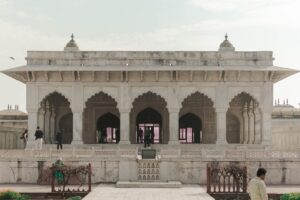 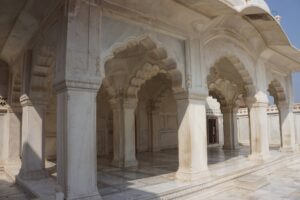 We are offering specially designed features and selected destinations to cater quality services for halal-friendly tourism and hospitality whilst on trips and holidays in India. During this process we have restructured the models of travel and hospitalhalal-friendlyg halal friendly features and amenities

KASHMIR THE HEAVEN ON EARTH